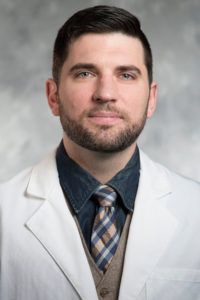 Dr. Piper Kilpatrick joined CFPSM in April 2019 after serving as the medical director of SportsCare at the Heritage Valley Healthcare System as well as the head team physician for Geneva College, Riverside, Blackhawk, and Lincoln Park High Schools, and the concussion management specialist for another 6 area high schools. During that time he also served as the Associate Director of Family Medicine for the Heritage Valley Family Medicine Residency. He also served as the chief consultant physician to the Bell School of Irish Dance.

He completed his Sports Medicine Fellowship at the University of Pittsburgh Medical Center Shadyside Hospital where he served as a team physician for the Pittsburgh Penguins, Robert Morris University, Pittsburgh Passion, and Mt. Lebanon High School. He also was the co-medical director for the 2012-2013 NCAA Frozen Four tournament and assisted with coverage of the 2011-2013 Pittsburgh Marathons.

Prior to that he completed his residency in Family Medicine at the University of Pittsburgh Medical Center St. Margaret Hospital program and medical school at St. George’s University School of Medicine.

Dr. Kilpatrick was born in Beaver Falls, Pennsylvania, but spent the majority of his childhood traveling with his family. He spent time in Puerto Rico, England, Canada, and Australia, with brief visits to a handful of other countries before returning to Western Pennsylvania for the rest of school and college.

Dr. Kilpatrick’s great joy is working with his patients to improve their level of health no matter where they are starting from. His goal is to form a close partnership with his patients based on trust and openness so that he can better align with their personal health goals. Whether it be losing that last 5 pounds or getting your diabetes back under control he will work to formulate a plan that is both evidence based and in line with the patient’s goals.

Dr. Kilpatrick loves all sports and dance and has yet to find a sport he isn’t willing to give a shot at. Good luck mentioning a sport he hasn’t participated in or at least heard of. He has played soccer for the Pittsburgh Strikers and U-18 Marara Dragons in Darwin Australia before joining the Geneva College soccer team, Detroit Wolftones Gealic Football club, Pitt City Men’s Rugby Club, and a host of club sports. He is currently suffering his way through the first few years of jiu jitsu training.